Walking holiday with both guided and self-guided options in Spain 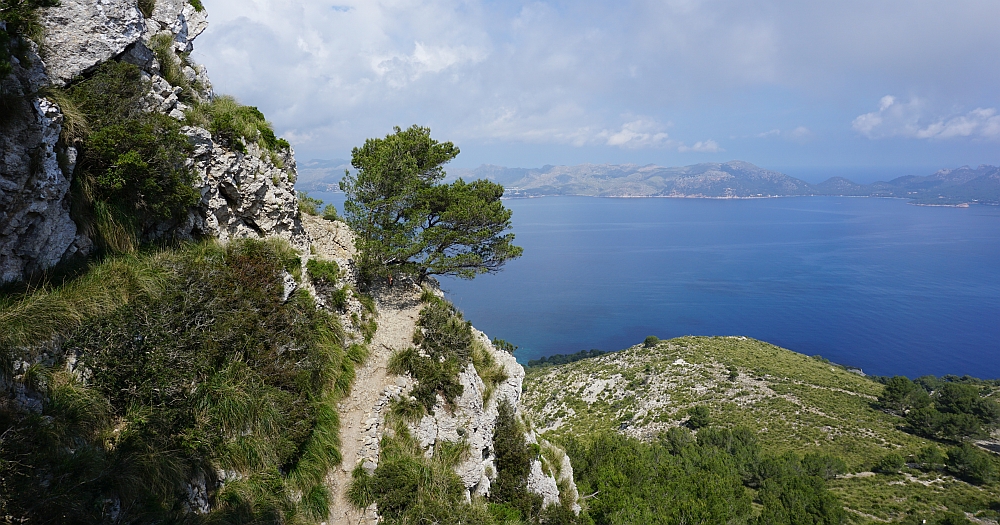 A 6 day long distance hike in the famous Tramuntana mountain chain in Mallorca!

In 6 days we will cross the most beautiful part of the Tramuntana mountain chain which is located in the quiet and untouched part of Mallorca. Our trek starts in Estellencs passing Esporles, Deia, Puerto Soller, Tossals until we will reach Pollença in the north of the island.

The trek offers a great variety of landscapes, high mountains, beautiful lonesome beaches and rural fishing villages. The delicious Mallorcan kitchen will spoil us with fresh fish, Paella, Tapas and other culinary delights . Orange and lime trees not just look beautiful in the nature environment but also taste delicious and refreshing! In the lime stone formation you will find numerous caves and steep cliffs above the sea. They offer great cliff jumping opportunities for adrenaline junkies.

The traditional and simple mountain huts along the trek are a great experience! The refuges are located in unique spots in the mountains or just next to the sea.

The accommodation is in dormitory rooms (shared bathrooms on the floor) and the guardians prepare delicious 3 course dinner as well as breakfast. We prepare delicious lunch packs (sandwiches, chocolate, cereal bars, fruits & nuts) for our guests.

Day 1 – Arrival day
You will be transferred from Palma International Airport to your accommodation in Estellencs. A welcome meeting will follow.

Day 2 – From Estellencs to Esporles – 5 hours, 15km, 720m ascent, 690m descent
On an old post trek you will walk along olive terraces and oak trees until you reach Esporles. Until the 19th century this rough and rocky path used to be the main connection between Banyalbufar and Esporles. Ruinous stone walls remind of the old boundaries of the country estates. The 500 vertical metre climb is worth the effort as you will get rewarding views over the Tramuntana peaks and the coastline.

Day 3 – From Esporles to Deia – 7 hours, 19km, 1090m ascent, 1090m descent
You will hike on a small path which was only used by shepherds, hunters and coal miners in the past. This stage leads through the south-west part of the Serra de Tamuntana and through the beautiful village Valdemossa which is famous for its vineyards. After a wine tasting stop, you will climb a steep and rocky path to the pass, followed by a long descent through beautiful oak woods and meadows. After 7 hours we will reach the charming village Deia.

Day 4 – From Deia to Puerto de Soller – 3 hours, 10km, 250m ascent, 320m descent
This is the easiest and shortest stage. An old, beautiful trail passes traditional houses and a church from the 19th century until you reach Soller. You will arrive in Soller in the early afternoon so that you can have enough time to stroll along the beach or visit the market place, not to mention the numerous bars and restaurants.

Day 5 – From Puerto de Soller to Refugio Tossals – 8 hours, 20km, 930m ascent, 530m descent
After a relaxed hike the previous day you have the longest and toughest stage ahead of you! You have the opportunity to visit the two small and cultural villages Binibassi and Biniaraix. On exposed and steep trails you will climb an altitude of nearly 1000m! From here you can see down to Palma and almost over the entire island! With a bit of luck you will be able to spot an eagle or falcon. Orange and lemon trees will accompany you on your way down to the Refugio Tossal.

Day 6 – From Refugio Tossals to Lluc – 6 hours, 16km, 880m ascent, 870m descent
From the refuge we will have the opportunity to climb the second highest mountain of Mallorca. Breath-taking views over the sea and the Cuber dam will be your reward! On a sandy, windy path you head down to the impressive monastery which is located at the entrance of the village Lluc where you spend the night.

Day 7 – From Lluc to Pollença – 5 hours, 17km, 150m ascent, 650m descent
Day 6 of the Ruta de Pedra en Sec will be the last but very beautiful walk. You will walk through an oak forest with trees that are more than 100 years old and will see all the impressive peaks of the Tramuntana chain one last time. After 5 hours we will reach our final destination Pollença.

Day 8 – Departure day
I transfer is included from Pollença to Palma International Airport.

Dates for guided option for 2020 – on request. Please contact the holiday provider through the contact form below.

Alternatively we could offer you a Self Guided hiking package (€ 450.- + effective cost for accommodation) matching your desired start date. Our self-guided package services contain the planning of:

We will plan the whole trekking tailored to your personal wishes. We create a planning sheet which we will send to you for approval before we start to make the necessary arrangements. Once we have done the planning we will send you a digital version of the package in a PDF file so that you can already read about the tour. The hard copy of the self-guided package will be sent to you per post.

You can choose from the following options / extras in your package:

Get in touch for more information about this walking holiday:

All other costs, including travel costs to Palma International Airport.

Share on TwitterShare on FacebookShare on WhatsAppShare on LinkedIn