France is the world’s first tourism destination. And it’s a fantastic country for walking too. France has many beautiful and tranquil rural regions prefect for walking.

Here you can read about walking in France and France as a walking holiday destination. If you want to see which walks are available, have a look at our overview of walking holidays in France.

France is the largest country in Western Europe and has a wide range of landscapes. So much variety means there is something for everyone who wants to go walking in France.

Walking in the west and north of France

The west of France is fairly flat and has a landscape that consists of plains and plateaux. Even though there are no high mountains here, the landscape is still very varied. You’ll find very pretty countryside from the lush river plains of the Seine and Loire rivers, to the coastal plains in Flanders along the coast. If you enjoy walking through easier going terrain, this area of France is a good choice.

In the North of France, the French Ardennes are a heavily forested region with rolling hills and ridges. The Ardennes is an ancient massif worn down by a long period of erosion. The range towers high over the river Meuse, and plunges down towards it in a succession of cliffs. For walking in lower mountains and hills this area of France is very good.

In the lower western area of France, there are higher areas of rolling hills in Normandy and Brittany. Here you’ll find pastures, orchards, and especially in Brittany a deeply indented coastline with many beautiful harbours and beaches. Limestone cliffs occur in Normandy, and in Brittany a very rare type of rock forms pink granite cliffs. Coastal paths offer excellent walking opportunities in both areas.

Walking in the South of France

The South of France has many beautiful regions for walking. And with little rain and lots of sunshine the climate is almost perfect for walking here. Particularly good areas are the Dordogne, the Bordeaux and the Provence. In these areas you’ll find some France’s prettiest rivers and picturesque, rolling rural landscapes.

The Eastern and central mountain ranges

The Vosges in France’s far north-east is a low mountain range. It’s connected to the Massif Central through the rolling vineyard landscapes of Burgundy and it’s good walking in this part of France.

The Jura is a small mountain range to the north of the Alps. The name Jura means “forested mountains”, and oak and beech forests dominate here. Higher in the Jura Mountains, fir trees take over from broadleaved forest. And ultimately the firs make way for alpine grasslands. The limestone landscape is dramatic with alternating mountains and valleys and breathtakingly high peaks.

Both the Vosges and the Massif Central have a landscape of rounded peaks with steep-sided valleys, where you can find some very picturesque walks. There are also many extinct volcanoes in the central massif, such as the Cantal and the Puy de Dome. The French Alps and the Massif Central are separated by the valley and delta of the Rhône. With its source in Switzerland, the Rhône River weaves through central and southern France to the Mediterranean. It’s the second longest river in France and forms Western Europe’s largest estuary, with the famous Camargue wetlands, a haven for wildlife where more than 400 bird species occur.

All these things make the eastern and central mountain ranges a beautiful area for walking in France.

West of the Alps, lies a large area of subalpine mountain ranges. These include various mountains in the Provence, such as the Bochaine and Luberon mountains. In the French Alps you’ll find beautiful mountain scenery and walks for all tastes. The French Alps start at the coast, where they are called the Maritime Alps. Peaks rise to 3000 metres here, and there are many attractive villages. Close to the Mediterranean, the Maures and the Estérel have impressive scenery with ravines carved out by downpours of Mediterranean rain. 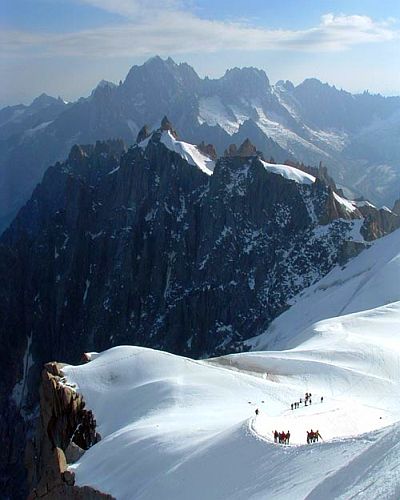 Stunning mountain scenery in the French Alps. You don’t have to go climbing here. There are walks for all tastes in this part of France.

The Alps were formed as a result of the collision of the African and European tectonic plates. This happened over a long period, roughly 35 to 5 million years ago. The French Alps were subsequently sculpted by glaciers, and it’s here that you’ll find the highest summit of the Alps: the Mont Blanc reaching to almost 5000 metres. This part of France is superb for walking. With stunning views, pleasant summer weather, meadows with wildflowers, and many interesting towns and villages, there is something for everyone’s walking tastes here.

The French Pyrenees are older than the Alps. They were formed roughly about 40 million years ago when France and Spain collided. The massive and unworn character of the Pyrenees comes from its abundance of granite, which is particularly resistant to erosion. Gletsjers and the ice ages also have not had such a strong influence on these mountains at France’s southern border.

If you consider walking in France, it’s useful to know that France has a very varied climate. This is a result of France’s diverse topography and the influence of the Atlantic Ocean and Mediterranean Sea. The north and north-west of France, have a temperate-maritime climate, somewhat similar to Britain’s. This is great for walking in summer. France’s south-east, including areas like the Provence, has a Mediterranean climate. This part of France is warmer and offers very pleasant walking in spring and autumn. In the central France the climate becomes more continental. Summers here are hot and winters cold. There is also less rainfall here. The high mountain regions of the French Alps and the French Pyrenees have an alpine climate with long snow cover.

France was one of the first countries to form a ministry of environment, in 1971. There are 9 national parks in France and an additional 50 regional nature parks. These include some very special habitats and landscapes, such as the Ecrins National Park, Mercantour National Park and Vanoise National Park in the French Alps as well as the Pyrenees National Park. So if you go walking in France you can expect to see a lot of beautiful nature and special wildlife.

With an extensive walking network, France is a perfect country for walking

The national walking paths cover long distances, for example from the Ardennes in the north of France to the Mediterranean in the south.

The regional paths normally form circular walking routes within a region. And the local walking paths branch out from many towns and villages. These walking routes are established and maintained by the French Long Distance Walking Association.

The small-scale walking holiday providers on Walkingholidayinfo.com make full use of France’s extensive system of walking trails. They have handpicked the very best walking routes and viewpoints for you to enjoy during your walking holiday in France.

Add France’s varied landscapes, its many historic villages and vibrant culture, the beautiful French wines and cuisine and you have a wonderful walking holiday destination in Europe.