The Greek island of Amorgos, a paradise for a walking holiday!

Amorgos is the Easternmost island of the Cyclades group, between Naxos and Astypalea. With a good network of paths and some of the most beautiful scenery in the Cyclades… it’s a perfect location for a walking holiday.

Amorgos is a mountainous island, but most tracks have a fairly gentle slope, so you can hike up and down with relative ease. There are also two small plains around its harbours and another one in the main agricultural area of the island. Amorgos has some of the most pronounced features of all Cyclades due to its starkly barren soil and the steep cliffs along the coast.

Nature has endowed Amorgos with some of the most beautiful and imposing landscapes in the Cyclades, both along the sea (such as the beaches of Mouros and Agia Anna), as well as in the mountains. Mt.Krikelos is the highest peak of Amorgos (821 m.) located at its Northern end. There are few more peaks with amazing views – Profitis Ilias (699 m.) at the centre of the island, where you can see all the land around you; and Korax (607 m.) in the Southwest.

The capital, Chora, is located at the centre of the island. It’s an attractive little town with many white-washed houses and typical Greek windmills sitting on a hillside. 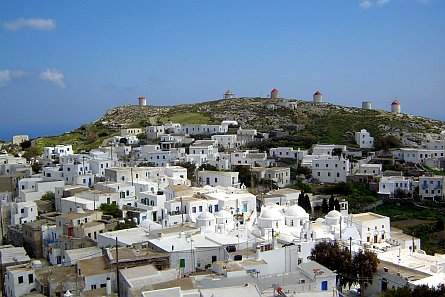 To the South is the rural settlement of Arkesini, and in the North the port and villages of Aegiali. There are some more settlements on the island, all a few miles apart, which means you can walk from one place to the next very well.

Amorgos has an old trail network with many paths still intact for visitors to enjoy hiking through spectacular natural settings, past agricultural monuments and serene beaches.

Amorgos’ landscape is also famous for its wild herbs that grow in abundance everywhere on the island. Walking along the extended network of marked paths and secondary trails, you can experience the calm silence, authentic island scenery and some of the most breathtaking views of the Aegean.

While walking, you’ll likely to meet shepherds with their goats and sheep, farmers cultivating their land in the old, traditional way, picking the olives or grapes in autumn, carrying the crops on donkeys. There are also many wind-mills, wells, threshing circles, old churches, ancient acropoles and ruined castles all around the island. The original, rural life is still active and alive. Many festivals happen around the year, and visitors are usually invited to participate, taste the food and drinks served and join in the dances.

Monasteries and churches, 370 in total, are scattered all around Amorgos. One of the most popular – the Byzantine Chozoviotissa Monastery is over 1000 years old!

Semeli is from Athens, but she loves the island of Amorgos and moved there permanently. She is a hiker and enjoys walking the beautiful paths of Amorgos. She is even involved in cleaning and maintaining the island's paths.