On La Gomera, a small island that’s part of Spain’s Canaries, you’ll find yourself in a hiker’s paradise with stunning scenery.

Call me a romantic, but I adore woodland and forest rambles above all other landscapes in which to roam. I think this is due to the fairy tale scenery that invokes my imagination and fills my senses with joy.

Whilst in La Gomera in July 2019, which is a well-known hiking Mecca, my partner Andy of Tenerife Guided Walks took me for a beautiful walk in el Parque Nacional de Garajonay. We started on the outskirts of the forest which is covered in mostly laurel. The trees were adorned with moss which dangled from their branches like garlands. A fine mist clung to the canopy and danced through its branches. I was expecting a witch on a broom stick to appear at any moment. 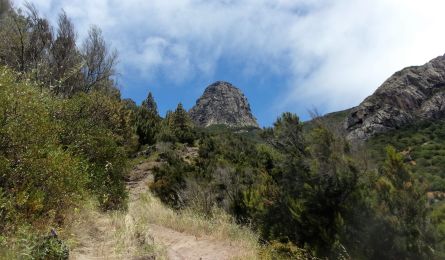 We soon left the forest and entered woodland as we ascended many log lined steps painstakingly put there by the local council to provide good passage along the way. The path and steps were lined with wax myrtle or tree heath and many early Summer flowers.

A sacred site full of history and legend

The high point of this hike (in more ways than one) was our destination, el Alto de Garajonay, the highest point in La Gomera which is steeped in history and famous for a local legend.

On a clear day you can see Tenerife with magnificent Mount Teide dominating the skyline, La Palma and El Hierro. This is a sacred mountain which stands at 1,483m above sea level. There are the remains of a 6th century place of worship where the Guanches worshipped their God “Orahan” as they did on all mountain tops because they felt closer to heaven.

During archaeological excavations, remains of animal sacrifices and burnt plants and flowers were discovered here. And this was also the final holdout point during the Spanish Conquest, some 9 centuries later.

This sacred on La Gomera site gave me a feeling of spirituality, as I couldn’t help but try to imagine what the Guanche’s day to day lives were like… What they believed in, and who the people were that worshipped here all those years ago.

How Garajonay got its name

At this point, I will just mention the famous local legend of how Garajonay got its name. It is said that some time before the Spanish Conquest, a beautiful princess called Gara lived on La Gomera who fell in love with a peasant’s son from Tenerife called Jonay.

He used to sail to La Gomera nearly every day to visit his love, but it was a love that was doomed as a priest predicted a great misfortune for the couple. As they were about to be married, a powerful earthquake shook Tenerife. Our magnificent Mount Teide spewed lava from its mighty summit and the sea around La Gomera turned red and the island of La Gomera began to glow.

Gara’s family thought this an omen from God and forced Jonay back to Tenerife. But his love for Jonay was so strong, that he returned to meet her a little while later and they ran away and hid in the forest high up on the island.

The lovers could see no way forward so they took the drastic steps of taking their own lives by stabbing themselves in their chests with lances made of Laurel and then died in each other’s arms. Ever since, the National Park in La Gomera remembers these 2 famous lovers in its name: Garajonay.

Having left the pinnacle of this holy place, our return journey was a gentle descent, again, through very pretty woodland. Here flowers were out in profusion in various shades of purple and yellow including the Gomera endemics Pericallis street ziti, Micromedias, and Tolpis proustii.

White daisies were in profusion and really at their best which carpeted the sides of the paths. Here, we also saw many butterflies including Red Admirals, Vanessa atalanta, and the Canary (Indian) Red Admiral, Vanessa vulcanica. There were also many bees sipping the nectar of purple thistles and what seemed like 100s of swifts darting to and fro at breakneck speeds, feeding on the air.

A walk to remember

This beautiful short walk fulfilled my rambling wish list: forest, woodland, pretty flowers, wildlife, stunning views, and history and romance were the icing on the cake.

Our next guided walking holiday on La Gomera is 9-14 May 2020. If this is of interest to you, then please do contact us in good time for further information and to request the full brochure.

La Gomera is the second-smallest island of the main islands in Spain’s Canary Island chain. It’s covered in volcanic mountains, crisscrossed with hiking trails. At higher altitudes there are dense forests of ferns and moss-covered trees, which grow in the mists of Garajonay National Park. Many visitors find La Gomera a wonderful island that’s very romantic with spectacular views. It’s a combination between high mountains and beaches with black sand, and on the excellent roads you can soon be above the clouds. The island has a fascinating history and everywhere you stop there is something to catch your interest. A paradise for hikers!

The larger photos are by Lynne and Andy from Tenerife Guided Walks. The smaller photos are courtesy of the amazing community of photographers at unsplash: clouded forest, sunset at beach, LauriSilva track on La Gomera, and an island view onto the Atlantic Ocean on La Gomera.

Lynne and Andy together run Tenerife Guided Walks. Lynne is Andy’s partner and looks after all the administration for Tenerife Guided Walks including enquiries, queries and bookings. She's a relative newbie to hiking, but thanks to Andy her eyes have been opened to the wonders and joys of hiking Tenerife’s mountains and forests.